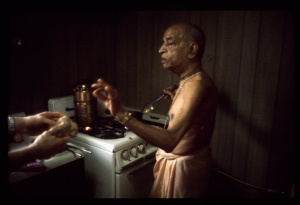 My dear King Prācīnabarhiṣat, in this way King Purañjana, with his heart full of lust and sinful reactions, began to enjoy sex with his wife, and in this way his new life and youth expired in half a moment.

In this verse Śrīla Govinda dāsa actually says that there is no bliss in the enjoyment of youthful life. In youth a person becomes very lusty to enjoy all kinds of sense objects. The sense objects are form, taste, smell, touch and sound. The modern scientific method, or advancement of scientific civilization, encourages the enjoyment of these five senses. The younger generation is very pleased to see a beautiful form, to hear radio messages of material news and sense gratificatory songs, to smell nice scents, nice flowers, and to touch the soft body or breasts of a young woman and gradually touch the sex organs. All of this is also very pleasing to the animals; therefore in human society there are restrictions in the enjoyment of the five sense objects. If one does not follow, he becomes exactly like an animal.

Thus in this verse it is specifically stated, kāma-kaśmala-cetasaḥ: the consciousness of King Purañjana was polluted by lusty desires and sinful activities. In the previous verse it is stated that Purañjana, although advanced in consciousness, lay down on a very soft bed with his wife. This indicates that he indulged too much in sex. The words navaṁ vayaḥ are also significant in this verse. They indicate the period of youth from age sixteen to thirty. These thirteen or fifteen years of life are years in which one can very strongly enjoy the senses. When one comes to this age he thinks that life will go on and that he will simply continue enjoying his senses, but, "Time and tide wait for no man." The span of youth expires very quickly. One who wastes his life simply by committing sinful activities in youth immediately becomes disappointed and disillusioned when the brief period of youth is over. The material enjoyments of youth are especially pleasing to a person who has no spiritual training. If one is trained only according to the bodily conception of life, he simply leads a disappointed life because bodily sense enjoyment finishes within forty years or so. After forty years, one simply leads a disillusioned life because he has no spiritual knowledge. For such a person, the expiration of youth occurs in half a moment. Thus King Purañjana's pleasure, which he took in lying down with his wife, expired very quickly.

Kāma-kaśmala-cetasaḥ also indicates that unrestricted sense enjoyment is not allowed in the human form of life by the laws of nature. If one enjoys his senses unrestrictedly, he leads a sinful life. The animals do not violate the laws of nature. For example, the sex impulse in animals is very strong during certain months of the year. The lion is very powerful. He is a flesh-eater and is very strong, but he enjoys sex only once in a year. Similarly, according to religious injunctions a man is restricted to enjoy sex only once in a month, after the menstrual period of the wife, and if the wife is pregnant, he is not allowed sex life at all. That is the law for human beings. A man is allowed to keep more than one wife because he cannot enjoy sex when the wife is pregnant. If he wants to enjoy sex at such a time, he may go to another wife who is not pregnant. These are laws mentioned in the Manu-saṁhitā and other scriptures.

These laws and scriptures are meant for human beings. As such, if one violates these laws, he becomes sinful. The conclusion is that unrestricted sense enjoyment means sinful activities. Illicit sex is sex that violates the laws given in the scriptures. When one violates the laws of the scriptures, or the Vedas, he commits sinful activities. One who is engaged in sinful activities cannot change his consciousness. Our real function is to change our consciousness from kaśmala, sinful consciousness, to Kṛṣṇa, the supreme pure. As confirmed in Bhagavad-gītā (paraṁ brahma paraṁ dhāma pavitraṁ paramaṁ bhavān (BG 10.12)), Kṛṣṇa is the supreme pure, and if we change our consciousness from material enjoyment to Kṛṣṇa, we become purified. This is the process recommended by Lord Caitanya Mahāprabhu as the process of ceto-darpaṇa-mārjanam (CC Antya 20.12), cleansing the mirror of the heart.