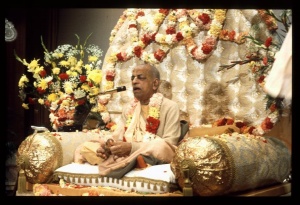 My dear Lord, Your two lotus feet are so beautiful that they appear like two blossoming petals of the lotus flower which grows during the autumn season. Indeed, the nails of Your lotus feet emanate such a great effulgence that they immediately dissipate all the darkness in the heart of a conditioned soul. My dear Lord, kindly show me that form of Yours which always dissipates all kinds of darkness in the heart of a devotee. My dear Lord, You are the supreme spiritual master of everyone; therefore all conditioned souls covered with the darkness of ignorance can be enlightened by You as the spiritual master.

In Bhagavad-gītā it is said that in order to make spiritual progress, one must become fearless. Abhayaṁ sattva-saṁśuddhiḥ (BG 16.1). Fearfulness is the result of material involvement. It is also said in Śrīmad-Bhāgavatam (SB 11.2.37), bhayaṁ dvitīyābhiniveśataḥ syāt: fearfulness is a creation of the bodily conception of life. As long as one is absorbed in the thought that he is this material body, he is fearful, and as soon as one is freed from this material conception, he becomes brahma-bhūta (SB 4.30.20), or self-realized, and immediately becomes fearless. Brahma-bhūtaḥ prasannātmā (BG 18.54). Without being fearless, one cannot be joyful. The bhaktas, the devotees, are fearless and always joyful because they are constantly engaged in the service of the lotus feet of the Lord. It is also said:

By practicing bhagavad-bhakti-yoga, one becomes fearless and joyful. Unless one becomes fearless and joyful, he cannot understand the science of God. Bhagavat-tattva-vijñānaṁ mukta-saṅgasya jāyate. This verse refers to those who are completely liberated from the fearfulness of this material world. When one is so liberated, he can really understand the transcendental features of the form of the Lord. Lord Śiva therefore advises everyone to practice bhagavad-bhakti-yoga. As will be clear in the following verses, by doing so one can become really liberated and enjoy spiritual bliss.

It is also stated:

Thus the Vedas (Śvetāśvatara Upaniṣad 6.23) enjoin that for one who has unflinching faith in the lotus feet of the Lord, as well as in the spiritual master, the real import of Vedic knowledge can be revealed.