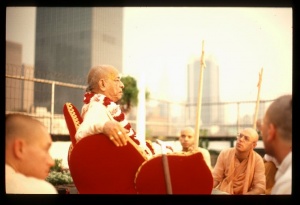 Whoever, with great reverence and adoration, regularly reads, chants and describes the history of Mahārāja Pṛthu's activities will certainly increase unflinching faith and attraction for the lotus feet of the Lord. The Lord's lotus feet are the boat by which one can cross the ocean of nescience.

Thus end the Bhaktivedanta purports of the Fourth Canto, Twenty-third Chapter, of the Śrīmad-Bhāgavatam, entitled "Mahārāja Pṛthu's Going Back Home."