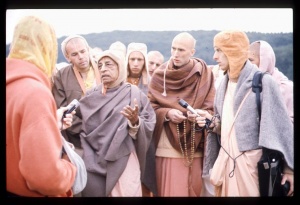 If a king, who is desirous of attaining victory and ruling power, chants the narration of Pṛthu Mahārāja three times before going forth on his chariot, all subordinate kings will automatically render all kinds of taxes unto him—as they rendered them unto Mahārāja Pṛthu—simply upon his order.

Since a kṣatriya king naturally desires to rule the world, he wishes to make all other kings subordinate to him. This was also the position many years ago when Pṛthu Mahārāja was ruling over the earth. At that time he was the only emperor on this planet. Even five thousand years ago, Mahārāja Yudhiṣṭhira and Mahārāja Parīkṣit were the sole emperors of this planet. Sometimes the subordinate kings rebelled, and it was necessary for the emperor to go and chastise them. This process of chanting the narrations of the life and character of Pṛthu Mahārāja is recommended for conquering kings if they want to fulfill their desire to rule the world.