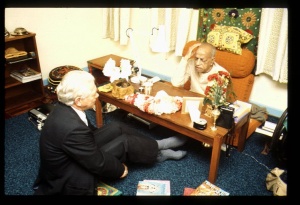 In Bhagavad-gītā it is recommended that one should become a devotee regardless of one's condition. Whether one is without desire (akāma) or with desire (sakāma), or whether one desires liberation (mokṣa-kāma), he is advised to worship the Supreme Lord and execute devotional service unto Him. By so doing, one attains all perfection in any field of life. The process of devotional service—especially hearing and chanting—is so powerful that it can bring a person to the perfectional stage. In this verse brāhmaṇas, kṣatriyas, vaiśyas and śūdras are mentioned, but here it should be understood that that reference is to the brāhmaṇa who is born in a brahminical family, the kṣatriya who is born in a kṣatriya family, the vaiśya who is born in a vaiśya family and the śūdra in a śūdra family. But whether one is a brāhmaṇa, kṣatriya, vaiśya or śūdra, he can attain perfection simply by hearing and chanting.

To take birth in a family of brāhmaṇas is not the ultimate finishing touch; one must have the power of a brāhmaṇa, which is called brahma-tejas. Similarly, taking birth in a royal family is not the all in all; one must possess the power to rule the world. Similarly, taking birth as a vaiśya is not all; one must possess hundreds or thousands of animals (specifically cows) and rule over other vaiśyas as Nanda Mahārāja did in Vṛndāvana. Nanda Mahārāja was a vaiśya who possessed nine hundred thousand cows and ruled over many cowherd men and boys. A person who is born in a śūdra family can become greater than a brāhmaṇa simply by accepting devotional service and giving aural reception to the pastimes of the Lord and His devotees.