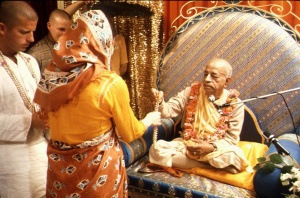 In respect to the ego, the total material energy is sundered in two parts—one agitated by the mode of ignorance and the other agitated by the modes of passion and goodness. Due to agitation by the mode of ignorance, the five gross elements are created. Due to agitation by the mode of passion, the mind is created, and due to agitation by the mode of goodness, false egoism, or identification with matter, is created. The mind is protected by a particular type of demigod. Sometimes the mind (manaḥ) is also understood to have a controlling deity or demigod. In this way the total mind, namely the material mind controlled by material demigods, was amalgamated with the senses. The senses, in turn, were amalgamated with the sense objects. The sense objects are forms, tastes, smells, sounds, etc. Sound is the ultimate source of the sense objects. The mind was attracted by the senses and the senses by the sense objects, and all of them were ultimately amalgamated in the sky. The creation is so arranged that cause and effect follow one after the other. The merging process involves amalgamating the effect with the original cause. Since the ultimate cause in the material world is mahat-tattva, everything was gradually wound up and amalgamated with the mahat-tattva. This may be compared to śūnya-vāda, or voidism, but this is the process for cleansing the real spiritual mind, or consciousness.