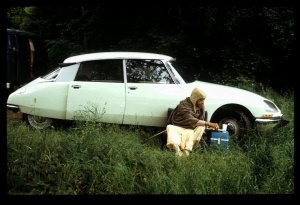 Out of the four principles—namely religion, economic development, sense gratification and liberation—liberation has to be taken very seriously. The other three are subject to destruction by the stringent law of nature—death.

Mokṣa, or liberation, has to be taken very seriously, even at the sacrifice of the other three items. As advised by Sūta Gosvāmī in the beginning of Śrīmad-Bhāgavatam, religious principles are not based on success in economic development. Because we are very attached to sense gratification, we go to God, to the temple or churches, for some economic reasons. Then again, economic development does not mean sense gratification. Everything should be adjusted in such a way that we attain liberation. Therefore in this verse, liberation, mokṣa, is stressed. The other three items are material and therefore subject to destruction. Even if somehow we accumulate a great bank balance in this life and possess many material things, everything will be finished with death. In Bhagavad-gītā it is said that death is the Supreme Personality of Godhead, who ultimately takes away everything acquired by the materialistic person. Foolishly we do not care for this. Foolishly we are not afraid of death, nor do we consider that death will take away everything acquired by the process of dharma, artha and kāma. By dharma, or pious activities, we may be elevated to the heavenly planets, but this does not mean freedom from the clutches of birth, death, old age and disease. The purport is that we can sacrifice our interests in traivargya—religious principles, economic development and sense gratification—but we cannot sacrifice the cause of liberation. Regarding liberation, it is stated in Bhagavad-gītā(BG 4.9): tyaktvā dehaṁ punar janma naiti. Liberation means that after giving up this body one does not have to accept another material body. To the impersonalists liberation means merging into the existence of impersonal Brahman. But factually this is not mokṣa because one has to again fall down into this material world from that impersonal position. One should therefore seek the shelter of the Supreme Personality of Godhead and engage in His devotional service. That is real liberation. The conclusion is that we should not stress pious activities, economic development and sense gratification, but should concern ourselves with approaching Lord Viṣṇu in His spiritual planets, of which the topmost is Goloka Vṛndāvana, where Lord Kṛṣṇa lives. Therefore this Kṛṣṇa consciousness movement is the greatest gift for persons who are actually desiring liberation.