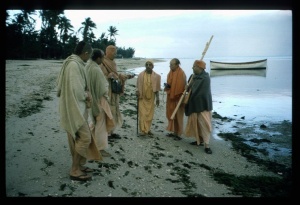 Dear lord, you are situated in your pure existential position of goodness; therefore you are the perfect representative of the Supreme Lord. You are glorified by your own prowess, and thus you are maintaining the entire world by introducing brahminical culture and protecting everyone in your line of duty as a kṣatriya.

Without the spread of brahminical culture and without proper protection from the government, no social standard can be maintained properly. This is admitted in this verse by the citizens of Mahārāja Pṛthu, who could maintain the wonderful situation of his government due to his position in pure goodness. The word vivṛddha-sattvāya is significant. In the material world there are three qualities—namely goodness, passion and ignorance. One has to be raised from the platform of ignorance to the platform of goodness by devotional service. There is no other means for elevating one from the lowest stage of life to the highest stage but the execution of devotional service; as advised in the previous chapters of Śrīmad-Bhāgavatam, one can raise himself from the lowest position to the highest simply by associating with devotees and hearing Śrīmad-Bhāgavatam regularly from their mouths.

"When one engages in devotional service in the first stages of hearing and chanting, the Lord, who is in everyone's heart, helps the devotee in cleansing his heart." (SB 1.2.17) In the gradual cleansing process, one is relieved of the influence of passion and ignorance and is situated on the platform of goodness. The result of association with the qualities of passion and ignorance is that one becomes lusty and greedy. But when one is elevated to the platform of goodness, he is satisfied in any condition of life and is without lust and greed. This mentality indicates one's situation on the platform of goodness. One has to transcend this goodness and raise himself to the pure goodness called vivṛddha-sattva, or the advanced stage of goodness. In the advanced stage of goodness one can become Kṛṣṇa conscious. Therefore Mahārāja Pṛthu is addressed here as vivṛddha-sattva, or one who is situated in the transcendental position. But Mahārāja Pṛthu, although situated in the transcendental position of a pure devotee, came down to the position of brāhmaṇa and kṣatriya for the benefit of human society and thus gave protection to the entire world by his personal prowess. Although he was a king, a kṣatriya, because he was a Vaiṣṇava he was also a brāhmaṇa. As a brāhmaṇa he could give proper instruction to the citizens, and as a kṣatriya he could rightly give protection to all of them. Thus the citizens of Mahārāja Pṛthu were protected in all respects by the perfect king.

Thus end the Bhaktivedanta purports of the Fourth Canto, Twenty-first Chapter, of the Śrīmad-Bhāgavatam, entitled "Instructions by Mahārāja Pṛthu."