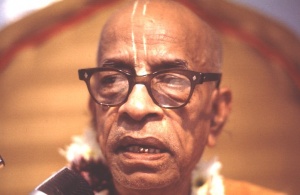 This is confirmed not only by the evidence of the Vedas but also by the personal behavior of great personalities like Manu, Uttānapāda, Dhruva, Priyavrata and my grandfather Aṅga, as well as by many other great personalities and ordinary living entities, exemplified by Mahārāja Prahlāda and Bali, all of whom are theists, believing in the existence of the Supreme Personality of Godhead, who carries a club.

Narottama dāsa Ṭhākura states that one has to ascertain the right path for his activities by following in the footsteps of great saintly persons and books of knowledge under the guidance of a spiritual master (sādhu-śāstra-guru-vākya). A saintly person is one who follows the Vedic injunctions, which are the orders of the Supreme Personality of Godhead. The word guru refers to one who gives proper direction under the authority of the Vedic injunctions and according to the examples of the lives of great personalities. The best way to mold one's life is to follow in the footsteps of the authorized personalities like those mentioned herein by Pṛthu Mahārāja, beginning with Svāyambhuva Manu. The safest path in life is to follow such great personalities, especially those mentioned in the Śrīmad-Bhāgavatam. The mahājanas, or great personalities, are Brahmā, Lord Śiva, Nārada Muni, Manu, the Kumāras, Prahlāda Mahārāja, Bali Mahārāja, Yamarāja, Bhīṣma, Janaka, Śukadeva Gosvāmī and Kapila Muni.