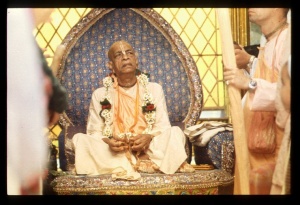 O protector of the people in general, please consider the purpose of your being incarnated by Lord Viṣṇu. The irreligious principles created by Indra are but mothers of so many unwanted religions. Please therefore stop these imitations immediately.

Lord Brahmā addresses King Pṛthu as prajāpate just to remind him of his great responsibility in maintaining the peace and prosperity of the citizens. Mahārāja Pṛthu was empowered by the Supreme Personality of Godhead for this purpose only. It is the duty of the ideal king to see that people are properly executing religious principles. Lord Brahmā especially requested King Pṛthu to conquer the pseudoreligious principles produced by King Indra. In other words, it is the duty of the state or king to put a stop to pseudoreligious systems produced by unscrupulous persons. Originally a religious principle is one, given by the Supreme Personality of Godhead, and it comes through the channel of disciplic succession in two forms. Lord Brahmā requested Pṛthu Mahārāja to desist from his unnecessary competition with Indra, who was determined to stop Pṛthu Mahārāja from completing one hundred yajñas. Instead of creating adverse reactions, it was better for Mahārāja Pṛthu to stop the yajñas in the interest of his original purpose as an incarnation. This purpose was to establish good government and set things in the right order.