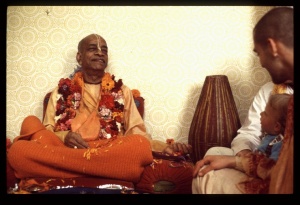 The duty of the king or the head of the government is described very nicely in this verse. It is the duty of the governmental head to see that people strictly follow a religious life. A king should also be strict in chastising the atheists. In other words, an atheistic or godless government should never be supported by a king or governmental chief. That is the test of good government. In the name of secular government, the king or governmental head remains neutral and allows people to engage in all sorts of irreligious activities. In such a state, people cannot be happy, despite all economic development. However, in this age of Kali there are no pious kings. Instead, rogues and thieves are elected to head the government. But how can the people be happy without religion and God consciousness? The rogues exact taxes from the citizens for their own sense enjoyment, and in the future the people will be so much harassed that according to Śrīmad-Bhāgavatam they will flee from their homes and country and take shelter in the forest. However, in Kali-yuga, democratic government can be captured by Kṛṣṇa conscious people. If this can be done, the general populace can be made very happy.