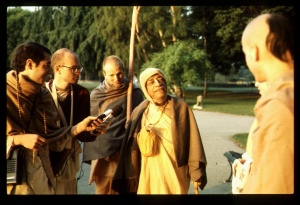 Vidura also inquired: How is it that the great sages, who were completely conversant with religious principles, desired to curse King Vena, who himself carried the rod of punishment, and thus awarded him the greatest punishment [brahma-śāpa]?

It is understood that the king is able to give punishment to everyone, but in this case it appears that the great sages punished him. The king must have done something very serious, otherwise how could the great sages, who were supposed to be the greatest and most tolerant, still punish him in spite of their elevated religious consciousness? It appears also that the king was not independent of the brahminical culture. Above the king was the control of the brāhmaṇas, and if needed the brāhmaṇas would dethrone the king or kill him, not with any weapon, but with the mantra of a brahma-śāpa. The brāhmaṇas were so powerful that simply by their cursing one would immediately die.