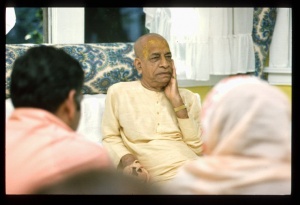 The Supreme Personality of Godhead, in His feature of eternal time, is present in the material world and is neutral towards everyone. No one is His ally, and no one is His enemy. Within the jurisdiction of the time element, everyone enjoys or suffers the result of his own karma, or fruitive activities. As, when the wind blows, small particles of dust fly in the air, so, according to one's particular karma, one suffers or enjoys material life.

Although the Supreme Personality of Godhead is the original cause of all causes, He is not responsible for anyone's material sufferings or enjoyment. There is no such partiality on the part of the Supreme Lord. The less intelligent accuse the Supreme Lord of being partial and claim that this is why one enjoys in this material world and another suffers. But this verse specifically says that there is no such partiality on the part of the Supreme Lord. Living entities, however, are never independent. As soon as they declare their independence of the supreme controller, they are immediately put into this material world to try their luck freely, as far as possible. When the material world is created for such misguided living entities, they create their own karma, fruitive activities, and take advantage of the time element, and thereby they create their own fortune or misfortune. Everyone is created, everyone is maintained, and everyone is ultimately killed. As far as these three things are concerned, the Lord is equal to everyone; it is according to one's karma that one suffers and enjoys. The living entity's higher or lower position, his suffering and enjoying, are due to his own karma. The exact word used in this connection is anīśāḥ, which means "dependent on their own karma." The example is given that the government gives everyone the facilities for governmental action and management, but by one's own choice one creates a situation which obliges him to exist under different types of consciousness. The example given in this verse is that when the wind blows, particles of dust float in the air. Gradually lightning occurs, and then torrents of rain follow, and thus the rainy season creates a situation of varieties in the forest. God is very kind—He gives everyone an equal chance—but by the resultant actions of one's own karma one suffers or enjoys this material world.