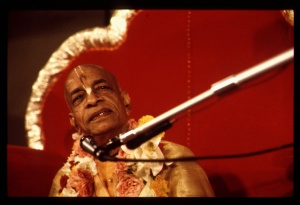 Śrī Maitreya said: Svāyambhuva Manu begot three daughters in his wife Śatarūpā, and their names were Ākūti, Devahūti and Prasūti.

In this Fourth Canto of Śrīmad-Bhāgavatam there are thirty-one chapters, and all these chapters describe the secondary creation by Brahmā and the Manus. The Supreme Lord Himself does the real creation by agitating His material energy, and then, by His order, Brahma, the first living creature in the universe, attempts to create the different planetary systems and their inhabitants, expanding the population through his progeny, like Manu and other progenitors of living entities, who work perpetually under the order of the Supreme Lord. In the First Chapter of this Fourth Canto there are descriptions of the three daughters of Svāyambhuva Manu and their descendants. The next six chapters describe the sacrifice performed by King Dakṣa and how it was spoiled. Thereafter the activities of Mahārāja Dhruva are described in five chapters. Then, in eleven chapters, the activities of King Pṛthu are described, and the next eight chapters are devoted to the activities of the Pracetā kings.