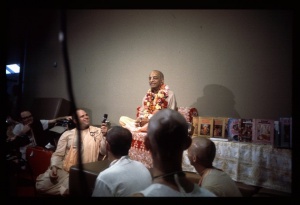 You may narrate also about the auspicious characteristics of the Lord in His different incarnations for the welfare of the twice-born, the cows and the demigods. Our minds are never satisfied completely, although we continuously hear of His transcendental activities.

The Lord appears in this universe in different incarnations like Matsya, Kūrma, Varāha and Nṛsiṁha, and He manifests His different transcendental activities for the welfare of the twice-born, the cows and the demigods. The Lord is directly concerned with the twice-born or civilized men. A civilized man is one who has taken his birth twice. A living entity takes birth in this mundane world due to the union of male and female. A human being is born due to union of the father and mother, but a civilized human being has another birth by contact with a spiritual master, who becomes the actual father. The father and mother of the material body are so only in one birth, and in the next birth the father and mother may be a different couple. But the bona fide spiritual master, as the representative of the Lord, is the eternal father because the spiritual master has the responsibility to lead the disciple to spiritual salvation, or the ultimate goal of life. Therefore, a civilized man must be twice-born, otherwise he is no more than the lower animals.

The cow is the most important animal for developing the human body to perfection. The body can be maintained by any kind of foodstuff, but cow's milk is particularly essential for developing the finer tissues of the human brain so that one can understand the intricacies of transcendental knowledge. A civilized man is expected to live on foodstuffs comprising fruits, vegetables, grains, sugar and milk. The bull helps in the agricultural process of producing grain, etc., and thus in one sense the bull is the father of humankind, whereas the cow is the mother, for she supplies milk to human society. A civilized man is therefore expected to give all protection to the bulls and cows.

The demigods, or the living entities who live in the higher planets, are far superior to human beings. Since they have better arrangements for living conditions, they live far more luxuriously than human beings, yet they are all devotees of the Lord. The Lord incarnates in different forms, such as those of a fish, a tortoise, a hog, and a combined lion and man, just to give protection to civilized man, the cow and the demigods, who are directly responsible for the regulative life of progressive self-realization. The whole system of the material creation is planned so that the conditioned souls may have the opportunity for self-realization. One who takes advantage of such an arrangement is called a demigod or civilized man. The cow is meant to help maintain such a high standard of living.

The Lord's pastimes for the protection of the twice-born civilized men, the cows and the demigods are all transcendental. A human being is inclined to hear good narrations and stories, and therefore there are so many books, magazines and newspapers on the market to satisfy the interests of the developed soul. But the pleasure in such literature, after it is read once, becomes stale, and people do not take any interest in reading such literature repeatedly. In fact, newspapers are read for less than an hour and then thrown in the dustbins as rubbish. The case is similar with all other mundane literatures. But the beauty of transcendental literatures like Bhagavad-gītā and Śrīmad-Bhāgavatam is that they never become old. They have been read in the world by civilized man for the last five thousand years, and they have never become old. They are ever fresh to the learned scholars and devotees, and even by daily repetition of the verses of Bhagavad-gītā and Śrīmad-Bhāgavatam, there is no satiation for devotees like Vidura. Vidura might have heard the pastimes of the Lord many, many times before he met Maitreya, but still he wanted the same narrations to be repeated because he was never satiated by hearing them. That is the transcendental nature of the Lord's glorious pastimes.