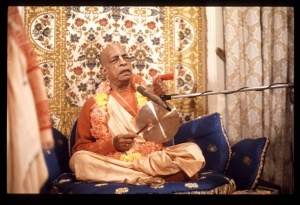 No one is dear to the Supreme Personality of Godhead, nor is anyone His enemy or friend. But He gives inspiration to those who have not forgotten Him and destroys those who have.

Forgetfulness of one's relationship with Lord Viṣṇu, the Supreme Personality of Godhead, is the cause of one's repeated birth and death. A living entity is as eternal as the Supreme Lord, but due to his forgetfulness he is put into this material nature and transmigrates from one body to another, and when the body is destroyed, he thinks that he is also destroyed. Actually, this forgetfulness of his relationship with Lord Viṣṇu is the cause of his destruction. Anyone who revives his consciousness of the original relationship receives inspiration from the Lord. This does not mean that the Lord is someone's enemy and someone else's friend. He helps everyone; one who is not bewildered by the influence of material energy is saved, and one who is bewildered is destroyed. It is said, therefore, hariṁ vinā na mṛtim taranti: no one can be saved from the repetition of birth and death without the help of the Supreme Lord. It is therefore the duty of all living entities to take shelter of the lotus feet of Viṣṇu and thus save themselves from the cycle of birth and death.