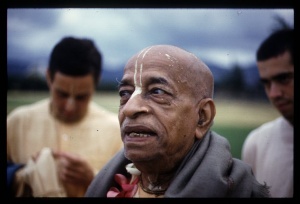 Thus situated in the highest transcendental stage, the mind ceases from all material reaction and becomes situated in its own glory, transcendental to all material conceptions of happiness and distress. At that time the yogī realizes the truth of his relationship with the Supreme Personality of Godhead. He discovers that pleasure and pain as well as their interactions, which he attributed to his own self, are actually due to the false ego, which is a product of ignorance.

Forgetfulness of one's relationship with the Supreme Personality of Godhead is a product of ignorance. By yoga practice one can eradicate this ignorance of thinking oneself independent of the Supreme Lord. One's actual relationship is eternally that of love. The living entity is meant to render transcendental loving service to the Lord. Forgetfulness of that sweet relationship is called ignorance, and in ignorance one is impelled by the three material modes of nature to think himself the enjoyer. When the devotee's mind is purified and he understands that his mind has to be dovetailed with the desires of the Supreme Personality of Godhead, he has attained the perfectional, transcendental stage, which is beyond the perception of material distress and happiness.

When the mind is dovetailed to act according to the desire of the Lord, one has attained the transcendental stage. The desire to lord it over material nature is the cause of ignorance, and when that desire is completely extinguished and the desires are dovetailed with those of the Supreme Lord, one has reached the perfectional stage. Upalabdha-parātma-kāṣṭhaḥ. Upalabdha means "realization." Realization necessarily indicates individuality. In the perfectional, liberated stage, there is actual realization. Nivṛttyā means that the living entity keeps his individuality; oneness means that he realizes happiness in the happiness of the Supreme Lord. In the Supreme Lord there is nothing but happiness. Ānandamayo 'bhyāsāt: the Lord is by nature full of transcendental happiness. In the liberated stage, oneness with the Supreme Lord means that one has no realization other than happiness. But the individual still exists, otherwise this word upalabdha, indicating individual realization of transcendental happiness, would not have been used.