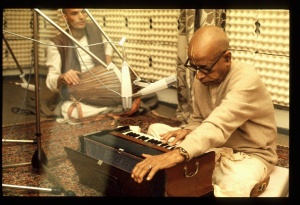 The yogīs, equipped with transcendental knowledge and renunciation and engaged in devotional service for their eternal benefit, take shelter of My lotus feet, and since I am the Lord, they are thus eligible to enter into the kingdom of Godhead without fear.

Teachings of Lord Kapila, the Son of Devahūti, Text 43

One who actually wants to be liberated from the entanglement of this material world and go back home, back to Godhead, is actually a mystic yogī. The words explicitly used here are yuktena bhakti-yogena. Those yogīs, or mystics, who engage in devotional service are the first-class yogīs. The first-class yogīs, as described in Bhagavad-gītā, are those who are constantly thinking of the Lord, the Supreme Personality of Godhead, Kṛṣṇa. These yogīs are not without knowledge and renunciation. To become a bhakti-yogī means to automatically attain knowledge and renunciation. That is the consequent result of bhakti-yoga. In the Bhāgavatam, First Canto, Second Chapter, it is also confirmed that one who engages in the devotional service of Vāsudeva, Kṛṣṇa, has complete transcendental knowledge and renunciation, and there is no explanation for these attainments. Ahaitukī—without reason, they come. Even if a person is completely illiterate, the transcendental knowledge of the scriptures is revealed unto him simply because of his engagement in devotional service. That is also stated in the Vedic literature. To anyone who has full faith in the Supreme Personality of Godhead and the spiritual master, all the import of the Vedic literatures is revealed. He does not have to seek separately; the yogīs who engage in devotional service are full in knowledge and renunciation. If there is a lack of knowledge and renunciation, it is to be understood that one is not in full devotional service. The conclusion is that one cannot be sure of entrance into the spiritual realm—in either the impersonal brahmajyoti effulgence of the Lord or the Vaikuṇṭha planets within that Brahman effulgence—unless he is surrendered unto the lotus feet of the Supreme Lord. The surrendered souls are called akuto-bhaya. They are doubtless and fearless, and their entrance into the spiritual kingdom is guaranteed.