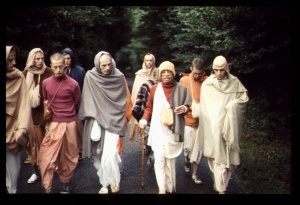 I shall also describe this sublime knowledge, which is the door to spiritual life, to My mother, so that she also can attain perfection and self-realization, ending all reactions to fruitive activities. Thus she also will be freed from all material fear.

Kardama Muni was anxious about his good wife, Devahūti, while leaving home, and so the worthy son promised that not only would Kardama Muni be freed from the material entanglement, but Devahūti would also be freed by receiving instruction from her son. A very good example is set here: the husband goes away, taking the sannyāsa order for self-realization, but his representative, the son, who is equally educated, remains at home to deliver the mother. A sannyāsī is not supposed to take his wife with him. At the vānaprastha stage of retired life, or the stage midway between householder life and renounced life, one may keep his wife as an assistant without sex relations, but in the sannyāsa order of life one cannot keep his wife with him. Otherwise, a person like Kardama Muni could have kept his wife with him, and there would have been no hindrance to his prosecution of self-realization.

Kardama Muni followed the Vedic injunction that no one in sannyāsa life can have any kind of relationship with women. But what is the position of a woman who is left by her husband? She is entrusted to the son, and the son promises that he will deliver his mother from entanglement. A woman is not supposed to take sannyāsa. So-called spiritual societies concocted in modern times give sannyāsa even to women, although there is no sanction in the Vedic literature for a woman's accepting sannyāsa. Otherwise, if it were sanctioned, Kardama Muni could have taken his wife and given her sannyāsa. The woman must remain at home. She has only three stages of life: dependency on the father in childhood, dependency on the husband in youth and, in old age, dependency on the grown-up son, such as Kapila. In old age the progress of woman depends on the grown-up son. The ideal son, Kapila Muni, is assuring His father of the deliverance of His mother so that His father may go peacefully without anxiety for his good wife.