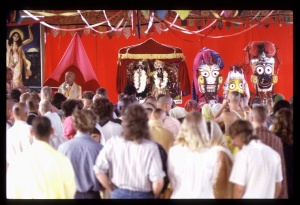 Manu spread a seat of kuśas and kāśas and worshiped the Lord, the Personality of Godhead, by whose grace he had obtained the rule of the terrestrial globe.

Manu is the father of mankind, and therefore from Manu comes the word man, or, in Sanskrit, manuṣya. Those who are in a better position in the world, having sufficient wealth, should especially take lessons from Manu, who acknowledged his kingdom and opulence to be gifts from the Supreme Personality of Godhead and thus always engaged in devotional service. Similarly, the descendants of Manu, or human beings, especially those who are situated in a well-to-do condition, must consider that whatever riches they have are gifts from the Supreme Personality of Godhead. Those riches should be utilized for the service of the Lord in sacrifices performed to please Him. That is the way of utilizing wealth and opulence. No one can achieve wealth, opulence, good birth, a beautiful body or nice education without the mercy of the Supreme Lord. Therefore, those who are in possession of such valuable facilities must acknowledge their gratefulness to the Lord by worshiping Him and offering what they have received from Him. When such acknowledgement is given, either by a family, nation or society, their abode becomes almost like Vaikuṇṭha, and it becomes free from the operation of the threefold miseries of this material world. In the modern age the mission of Kṛṣṇa consciousness is for everyone to acknowledge the supremacy of Lord Kṛṣṇa; whatever one has in his possession must be considered a gift by the grace of the Lord. Everyone, therefore, should engage in devotional service through Kṛṣṇa consciousness. If one wants to be happy and peaceful in his position, either as a householder or citizen or member of human society, one must promote devotional service for the pleasure of the Lord.