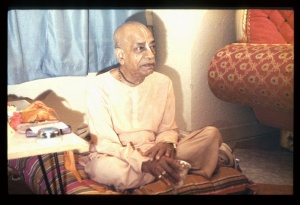 The great sage replied: Certainly I have a desire to marry, and your daughter has not yet married or given her word to anyone. Therefore our marriage according to the Vedic system can take place.

There were many considerations by Kardama Muni before accepting the daughter of Svāyambhuva Manu. Most important is that Devahūti had first of all fixed her mind on marrying him. She did not choose to have any other man as her husband. That is a great consideration because female psychology dictates that when a woman offers her heart to a man for the first time, it is very difficult for her to take it back. Also, she had not married before; she was a virgin girl. All these considerations convinced Kardama Muni to accept her. Therefore he said, "Yes, I shall accept your daughter under religious regulations of marriage." There are different kinds of marriages, of which the first-class marriage is held by inviting a suitable bridegroom for the daughter and giving her in charity, well dressed and well decorated with ornaments, along with a dowry according to the means of the father. There are other kinds of marriage, such as gāndharva marriage and marriage by love, which are also accepted as marriage. Even if one is forcibly kidnapped and later on accepted as a wife, that is also accepted. But Kardama Muni accepted the first-class way of marriage because the father was willing and the daughter was qualified. She had never offered her heart to anyone else. All these considerations made Kardama Muni agree to accept the daughter of Svāyambhuva Manu.