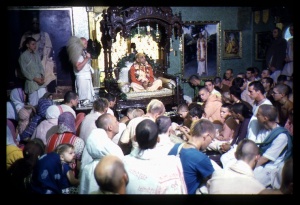 Svāyambhuva Manu, with his wife, mounted his chariot, which was decorated with golden ornaments. Placing his daughter on it with them, he began traveling all over the earth.

The Emperor Manu, as the great ruler of the world, could have engaged an agent to find a suitable husband for his daughter, but because he loved her just as a father should, he himself left his state on a golden chariot, with only his wife, to find her a suitable husband.