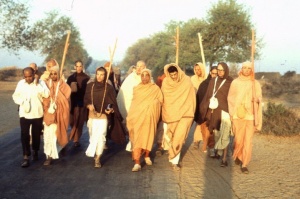 Who, after smelling the dust of His lotus feet even once, could ever forget it? Simply by expanding the leaves of His eyebrows, Kṛṣṇa has given the deathblow to those who were burdening the earth.

Lord Kṛṣṇa cannot be accepted as one of the human beings, even though He played the role of an obedient son. His actions were so extraordinary that by the simple raising of His eyebrows He could deliver death-blows to those who were burdening the earth.