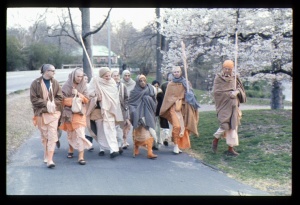 The Lord appeared in the mortal world by His internal potency, yoga-māyā. He came in His eternal form, which is just suitable for His pastimes. These pastimes were wonderful for everyone, even for those proud of their own opulence, including the Lord Himself in His form as the Lord of Vaikuṇṭha. Thus His [Śrī Kṛṣṇa's] transcendental body is the ornament of all ornaments.

In conformity with the Vedic hymns (nityo nityānāṁ cetanaś cetanānām (Kaṭha Upaniṣad 2.2.13)), the Personality of Godhead is more excellent than all other living beings within all the universes in the material world. He is the chief of all living entities; no one can surpass Him or be equal to Him in wealth, strength, fame, beauty, knowledge or renunciation. When Lord Kṛṣṇa was within this universe, He seemed to be a human being because He appeared in a manner just suitable for His pastimes in the mortal world. He did not appear in human society in His Vaikuṇṭha feature with four hands because that would not have been suitable for His pastimes. But in spite of His appearing as a human being, no one was or is equal to Him in any respect in any of the six different opulences. Everyone is more or less proud of his opulence in this world, but when Lord Kṛṣṇa was in human society, He excelled all His contemporaries within the universe.

When the Lord's pastimes are visible to the human eye, they are called prakaṭa, and when they are not visible they are called aprakaṭa. In fact, the Lord's pastimes never stop, just as the sun never leaves the sky. The sun is always in its right orbit in the sky, but it is sometimes visible and sometimes invisible to our limited vision. Similarly, the pastimes of the Lord are always current in one universe or another, and when Lord Kṛṣṇa disappeared from the transcendental abode of Dvārakā, it was simply a disappearance from the eyes of the people there. It should not be misunderstood that His transcendental body, which is just suitable for the pastimes in the mortal world, is in any way inferior to His different expansions in the Vaikuṇṭhalokas. His body manifested in the material world is transcendental par excellence in the sense that His pastimes in the mortal world excel His mercy displayed in the Vaikuṇṭhalokas. In the Vaikuṇṭhalokas the Lord is merciful toward the liberated or nitya-mukta living entities, but in His pastimes in the mortal world He is merciful even to the fallen souls who are nitya-baddha, or conditioned forever. The six excellent opulences which He displayed in the mortal world by the agency of His internal potency, yoga-māyā, are rare even in the Vaikuṇṭhalokas. All His pastimes were manifested not by the material energy but by His spiritual energy. The excellence of His rāsa-līlā at Vṛndāvana and His householder life with sixteen thousand wives is wonderful even for Nārāyaṇa in Vaikuṇṭha and is certainly so for other living entities within this mortal world. His pastimes are wonderful even for other incarnations of the Lord, such as Śrī Rāma, Nṛsiṁha and Varāha. His opulence was so superexcellent that His pastimes were adored even by the Lord of Vaikuṇṭha, who is not different from Lord Kṛṣṇa Himself.