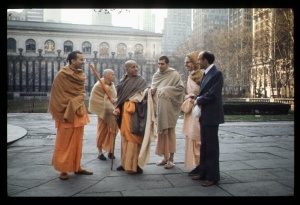 The difference between the inhabitants of a Vaikuṇṭha planet and those of a material planet is that in Vaikuṇṭha all the residents engage in the service of the Lord Himself and are equipped with all His good qualities. It has been analyzed by great personalities that when a conditioned soul is liberated and becomes a devotee, about seventy-nine percent of all the good qualities of the Lord develop in his person. Therefore in the Vaikuṇṭha world there is no question of enmity between the Lord and the residents. Here in this material world the citizens may be inimical to the chief executives or heads of state, but in Vaikuṇṭha there is no such mentality. One is not allowed to enter Vaikuṇṭha unless he has completely developed the good qualities. The basic principle of goodness is to accept subordination to the Supreme Personality of Godhead. The sages, therefore, were surprised to see that the two doormen who checked them from entering the palace were not exactly like the residents of Vaikuṇṭhaloka. It may be said that a doorman's duty is to determine who should be allowed to enter the palace and who should not. But that is not relevant in this matter because no one is allowed to enter the Vaikuṇṭha planets unless he has developed one hundred percent his mentality of devotional service to the Supreme Lord. No enemy of the Lord can enter Vaikuṇṭhaloka. The Kumāras concluded that the only reason for the doormen's checking them was that the doormen themselves were imposters.