Srimad-Bhagavatam - Third Canto - Chapter 14: Pregnancy of Diti in the Evening 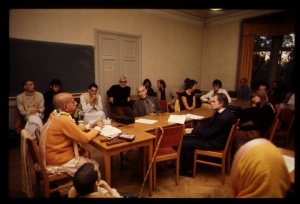 Śrī Vidura said: O chief amongst the great sages, I have heard by disciplic succession that Hiraṇyākṣa, the original demon, was slain by the same form of sacrifices, the Personality of Godhead [Lord Boar].