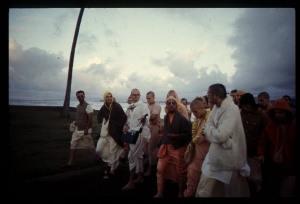 Influential stars, planets, luminaries and atoms all over the universe are rotating in their respective orbits under the direction of the Supreme, represented by eternal kāla.

In the Brahma-saṁhitā it is stated that the sun is the eye of the Supreme and it rotates in its particular orbit of time. Similarly, beginning from the sun down to the atom, all bodies are under the influence of the kāla-cakra, or the orbit of eternal time, and each of them has a scheduled orbital time of one saṁvatsara.