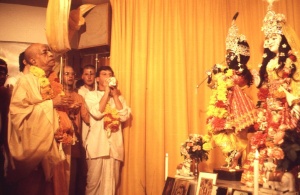 O learned brāhmaṇa, because of my drinking the nectar of the message of the infallible Personality of Godhead, which is flowing down from the ocean of your speeches, I do not feel any sort of exhaustion due to my fasting.

The disciplic succession from Brahmā, Nārada, Vyāsa and Śukadeva Gosvāmī is particularly different from others. The disciplic successions from other sages are simply a waste of time, being devoid of acyuta-kathā, or the message of the infallible Lord. The mental speculators can present their theories very nicely by reason and arguments, but such reasons and arguments are not infallible, for they are defeated by better mental speculators. Mahārāja Parīkṣit was not interested in the dry speculation of the flickering mind, but he was interested in the topics of the Lord because factually he felt that by hearing such a nectarean message from the mouth of Śukadeva Gosvāmī he was not feeling any exhaustion, even though he was fasting because of his imminent death.

One can indulge in hearing the mental speculators, but such hearing cannot endure for any length of time. One will be exhausted very soon from hearing such hackneyed ways of thinking, and no one in the world can be satisfied simply by hearing such useless speculations. The message of the Lord, especially from a personality like Śukadeva Gosvāmī, can never be tiring, even though one may be exhausted from other causes.

In some editions of the Śrīmad-Bhāgavatam, the text of the last line of this verse reads anyatra kupitād dvijāt, which means that the King might be overwhelmed by the thought of his imminent death by snakebite. The snake is also twice-born, and its anger is compared to the cursing brāhmaṇa boy who was without good intelligence. Mahārāja Parīkṣit was not at all afraid of death, for he was fully encouraged by the message of the Lord. One who is fully absorbed in acyuta-kathā can never be afraid of anything in this world.