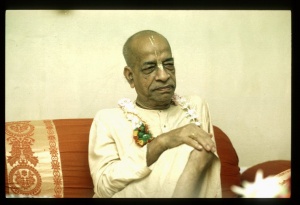 Then again, kindly describe how the proportionate accumulation of the reactions resulting from the different modes of material nature act upon the desiring living being, promoting or degrading him among the different species of life, beginning from the demigods down to the most insignificant creatures.

Life in the higher planets, known as the abodes of the denizens of heaven, is obtained not by the strength of spacecraft (as is now being contemplated by the inexperienced scientists), but by works done in the mode of goodness.

Even on the very planet where we are now living, there are restrictions upon the entrance of foreigners into a country where the citizens are more prosperous. For example, the American government has many restrictions for the entrance of foreigners from less prosperous countries. The reason is that the Americans do not wish to share their prosperity with any foreigner who has not qualified himself as a citizen of America. Similarly, the same mentality is prevailing in every other planet where there are more intelligent living beings residing. The higher planetary living conditions are all in the mode of goodness, and anyone desiring to enter the higher planets like the moon, sun and Venus must qualify thoroughly by activity in complete goodness.

Mahārāja Parīkṣit's inquiries are on the basis of proportionate actions of goodness which qualify one in this planet to be promoted to the highest regions of the universe.