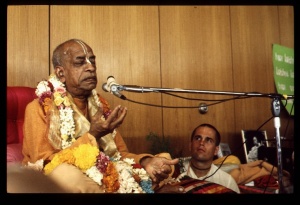 O Nārada, best of the transcendentalists, the forms of the body cannot take place as long as these created parts, namely the elements, senses, mind and modes of nature, are not assembled.

The different types of bodily construction of the living entities are exactly like different types of motorcars manufactured by assembling the allied motor parts. When the car is ready, the driver sits in the car and moves it as he desires. This is also confirmed in the Bhagavad-gītā (BG 18.61): the living entity is as if seated on the machine of the body, and the car of the body is moving by the control of material nature, just as the railway trains are moving under the direction of the controller. The living entities, however, are not the bodies; they are separate from the cars of the body. But the less intelligent material scientist cannot understand the process of assembling the parts of the body, namely the senses, the mind and the qualities of the material modes. Every living entity is a spiritual spark, part and parcel of the Supreme Being, and by the kindness of the Lord, for the Father is kind to His sons, the individual living beings are given a little freedom to act according to their will to lord it over the material nature. Just as a father gives some playthings to the crying child to satisfy him, the whole material creation is made possible by the will of the Lord to allow the bewildered living entities to lord it over things as they desire, although under the control of the agent of the Lord. The living entities are exactly like small children playing the material field under the control of the maidservant of the Lord (nature). They accept the māyā, or the maidservant, as all in all and thus wrongly conceive the Supreme Truth to be feminine (goddess Durgā, etc.). The foolish, childlike materialists cannot reach beyond the conception of the maidservant, material nature, but the intelligent grown-up sons of the Lord know well that all the acts of material nature are controlled by the Lord, just as a maidservant is under the control of the master, the father of the undeveloped children.

The parts of the body, such as the senses, are the creation of the mahat-tattva, and when they are assembled by the will of the Lord, the material body comes into existence, and the living entity is allowed to use it for further activities. This is explained as follows.