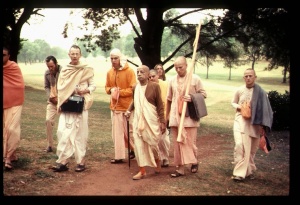 From the mode of goodness the mind is generated and becomes manifest, as also the ten demigods controlling the bodily movements. Such demigods are known as the controller of directions, the controller of air, the sun-god, the father of Dakṣa Prajāpati, the Aśvinī-kumāras, the fire-god, the King of heaven, the worshipable deity in heaven, the chief of the Ādityas, and Brahmājī, the Prajāpati. All come into existence.

Vaikārika is the neutral stage of creation, and tejas is the initiative of creation, while tamas is the full display of material creation under the spell of the darkness of ignorance. Manufacture of the "necessities of life" in factories and workshops, excessively prominent in the age of Kali, or in the age of the machine, is the summit stage of the quality of darkness. Such manufacturing enterprises by human society are in the mode of darkness because factually there is no necessity for the commodities manufactured. Human society primarily requires food for subsistence, shelter for sleeping, defense for protection, and commodities for satisfaction of the senses. The senses are the practical signs of life, as will be explained in the next verse. Human civilization is meant for purifying the senses, and objects of sense satisfaction should be supplied as much as absolutely required, but not for aggravating artificial sensory needs. Food, shelter, defense and sense gratification are all needs in material existence. Otherwise, in his pure, uncontaminated state of original life, the living entity has no such needs. The needs are therefore artificial, and in the pure state of life there are no such needs. As such, increasing the artificial needs, as is the standard of material civilization, or advancing the economic development of human society, is a sort of engagement in darkness, without knowledge. By such engagement, human energy is spoiled, because human energy is primarily meant for purifying the senses in order to engage them in satisfying the senses of the Supreme Lord. The Supreme Lord, being the supreme possessor of spiritual senses, is the master of the senses, Hṛṣīkeśa. Hṛṣīka means the senses, and īśa means the master. The Lord is not the servant of the senses, or, in other words, He is not directed by the dictation of the senses, but the conditioned souls or the individual living entities are servants of the senses. They are conducted by the direction or dictation of the senses, and therefore material civilization is a kind of engagement in sense gratification only. The standard of human civilization should be to cure the disease of sense gratification, and one can do this simply by becoming an agent for satisfying the spiritual senses of the Lord. The senses are never to be stopped in their engagements, but one should purify them by engaging them in the pure service of sense gratification of the master of the senses. This is the instruction of the whole Bhagavad-gītā. Arjuna wanted first of all to satisfy his own senses by his decision not to fight with his kinsmen and friends, but Lord Śrī Kṛṣṇa taught him the Bhagavad-gītā just to purify Arjuna's decision for sense gratification. Therefore Arjuna agreed to satisfy the senses of the Lord, and thus he fought the Battle of Kurukṣetra, as the Lord desired.