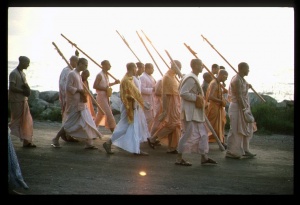 The highest perfection of human life, achieved either by complete knowledge of matter and spirit, by practice of mystic powers, or by perfect discharge of occupational duty, is to remember the Personality of Godhead at the end of life.

Nārāyaṇa is the transcendental Personality of Godhead beyond the material creation. Everything that is created, sustained, and at the end annihilated is within the compass of the mahat-tattva (material principle) and is known as the material world. The existence of Nārāyaṇa, or the Personality of Godhead, is not within the jurisdiction of this mahat-tattva, and as such, the name, form, attributes, etc. of Nārāyaṇa are beyond the jurisdiction of the material world. By the speculation of empiric philosophy, which discerns matter from spirit, or by cultivation of mystic powers, which ultimately helps the performer to reach any planet of the universe or beyond the universe, or by discharge of religious duties, one can achieve the highest perfection, provided one is able to reach the stage of nārāyaṇa-smṛti, or constant remembrance of the Personality of Godhead. This is possible only by the association of a pure devotee, who can give a finishing touch to the transcendental activities of all jñānīs, yogīs, or karmīs, in terms of prescribed duties defined in the scriptures. There are many historical instances of the achievement of spiritual perfection, such as that of the Sanakādi Ṛṣis or the nine celebrated Yogendras, who attained perfection only after being situated in the devotional service of the Lord. None of the devotees of the Lord ever deviated from the path of devotional service by taking to other methods as adopted by the jñānīs or yogīs. Everyone is anxious to achieve the highest perfection of his particular activity, and it is indicated herein that such perfection is nārāyaṇa-smṛti, for which everyone must endeavor his best. In other words, life should be molded in such a manner that one is able to progressively remember the Personality of Godhead in every step of life.