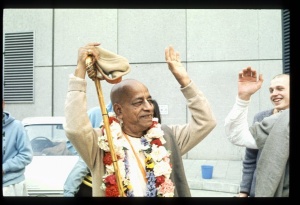 The lifetime of such an envious householder is passed at night either in sleeping or in sex indulgence, and in the daytime either in making money or maintaining family members.

Because human life is a combination of matter and spirit soul, the whole process of Vedic knowledge is directed at liberating the spirit soul from the contamination of matter. The knowledge concerning this is called ātma-tattva. Those men who are too materialistic are unaware of this knowledge and are more inclined to economic development for material enjoyment. Such materialistic men are called karmīs, or fruitive laborers, and they are allowed regulated economic development or association of woman for sex indulgence. Those who are above the karmīs, that is, the jñānīs, yogīs and devotees, are strictly prohibited from sex indulgence. The karmīs are more or less devoid of ātma-tattva knowledge, and as such, their life is spent without spiritual profit. The human life is not meant for hard labor for economic development, nor is it meant for sex indulgence like that of the dogs and hogs. It is specially meant for making a solution to the problems of material life and the miseries thereof. So the karmīs waste their valuable human life by sleeping and sex indulgence at night, and by laboring hard in the daytime to accumulate wealth, and after doing so, they try to improve the standard of materialistic life. The materialistic way of life is described herein in a nutshell, and how foolishly men waste the boon of human life is described as follows.