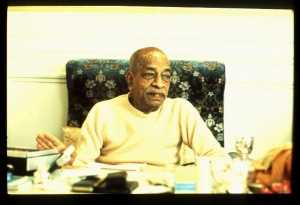 The various phases of one's material life, beginning with birth and culminating in death, are all properties of the body and do not affect the soul, just as the apparent waxing and waning of the moon does not affect the moon itself. Such changes are enforced by the imperceptible movements of time.

The body undergoes six changes: birth, growth, maintenance, production of by-products, dwindling and death. Similarly, the moon appears to grow, diminish and finally disappear. Since moonlight is a lunar reflection of sunlight, it is understood that the moon itself does not grow or diminish; rather, we perceive the reflection of the moon in various phases. Similarly, the eternal soul is not born, nor does it die, as confirmed in Bhagavad-gītā (BG 2.20): na jāyate mriyate vā kadācit. We perceive the reflection of the soul in the form of the gross material body and the subtle mind, which undergo various material changes.

According to Śrīla Śrīdhara Svāmī, the sun is a fiery planet and the moon is a watery planet. This is also confirmed by Śrīla Jīva Gosvāmī and further illustrates the ignorance of modern science about the actual nature of the moon planet.