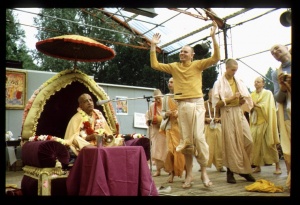 That which is expressed by material words or meditated upon by the material mind is not ultimate truth. What, therefore, is actually good or bad within this insubstantial world of duality, and how can the extent of such good and bad be measured?

The actual truth is the Supreme Personality of Godhead, from whom everything emanates, by whom everything is maintained, and in whom everything merges to rest. Material nature is the reflection of the Absolute Truth, and by the interaction of the material modes of nature the innumerable varieties of matter appear to be separate, independent truths. Māyā, illusion, distracts the conditioned soul from the Absolute Truth and absorbs his mind in the glaring manifestation of matter, which ultimately is nondifferent from the Absolute Truth, being an emanation from Him. The sense of good and bad as separate from the Supreme Lord is like the good and bad dreams experienced by a sleeping person. Good and bad dreams are equally unreal. Similarly, material good and evil have no permanent existence separate from the Personality of Godhead.

The Supreme Lord is the well-wisher of every living entity, and therefore execution of His order is good, whereas disobeying His order is bad. Lord Kṛṣṇa has created a perfect social and occupational system called varṇāśrama-dharma, and the Lord has further given perfect spiritual knowledge in Bhagavad-gītā and other literatures. Execution of Lord Kṛṣṇa's order will bring complete social, psychological, political, economic and spiritual success to human society. We should not foolishly look for so-called good outside the orders of the Personality of Godhead. Such orders are called the laws of God and constitute the essence, or substance, of religion.