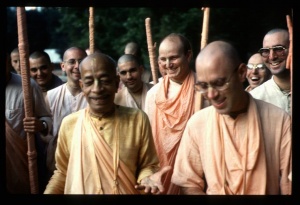 The mind, bound to the reactions of fruitive work, always meditates on the objects of the senses, both those that are seen in this world and those that are heard about from Vedic authority. Consequently, the mind appears to come into being and to suffer annihilation along with its objects of perception, and thus its ability to distinguish past and future is lost.

One may ask how the subtle body, or mind, gives up its connection with one physical body and enters another. Such entering and leaving of physical bodies is called birth and death by conditioned souls. One utilizes his present senses to meditate on the visible objects of this world—beautiful women, palatial estates, and so on—and similarly one daydreams about the heavenly planets described in the Vedas. As death occurs, the mind is pulled away from the objects of its immediate experience and enters another body to experience a new set of sense objects. As the mind undergoes total reorientation there is the apparent loss of one's previous mentality and creation of a new mind, though actually the same mind is experiencing, but in a different way.

The conditioned soul is overwhelmed by the constant flow of material experience consisting of direct perception and abstract contemplation of the objects of this world. One thereby loses his transcendental memory of his relationship with God. As soon as one identifies with this world he forgets his eternal identity and surrenders to the false ego created by māyā.