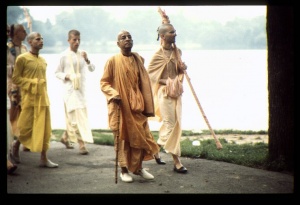 By chanting the holy name of the Supreme Lord, one comes to the stage of love of Godhead. Then the devotee is fixed in his vow as an eternal servant of the Lord, and he gradually becomes very much attached to a particular name and form of the Supreme Personality of Godhead. As his heart melts with ecstatic love, he laughs very loudly or cries or shouts. Sometimes he sings and dances like a madman, for he is indifferent to public opinion.

In this verse, pure love of God is being described. Śrīla Śrīdhara Svāmī has described this spiritual situation as samprāpta-prema-lakṣana-bhakti-yogasya saṁsāra-dharmātītāṁ gatim, or the perfectional stage of life in which one's devotional service to the Supreme Lord is enriched by ecstatic love. At that time, one's spiritual duties are entirely beyond the scope of worldly affairs.

In Caitanya-caritāmṛta (CC Adi 7.78), there is the following statement by Śrī Caitanya Mahāprabhu:

"It is the nature of the Hare Kṛṣṇa mahā-mantra that anyone who chants it immediately develops his loving ecstasy for Kṛṣṇa." (CC Adi 7.83) In this connection Śrīla Prabhupāda has commented, "These symptoms are very prominently manifest in the body of a pure devotee. Sometimes when our students of the Kṛṣṇa consciousness movement chant and dance, even in India people are astonished to see how these foreigners have learned to chant and dance in this ecstatic fashion. As explained by Caitanya Mahāprabhu, however, actually this is not due to practice, for without extra endeavor these symptoms become manifest in anyone who sincerely chants the Hare Kṛṣṇa mahā-mantra."

Śrīla Bhaktisiddhānta Sarasvatī Ṭhākura has warned us in this regard about the ungodly sahajiyās who imitate the pastimes of the Supreme Lord in an unauthorized way, neglecting the standard injunctions of Vedic scriptures, foolishly trying to take the position of Kṛṣṇa as Puruṣottama, and thus making a cheap farce of the exalted pastimes of the Lord. Their so-called ecstatic symptoms like crying, shivering and falling on the ground are not to be confused with the advanced features of devotional service described by Śrīdhara Svāmī as samprāpta-prema-lakṣaṇa-bhakti-yoga. Śrīla Prabhupāda comments in this regard, "One who has attained this bhāva stage is no longer under the clutches of the illusory energy." Similarly, Kṛṣṇadāsa Kavirāja states:

"For a devotee who has actually developed bhāva [love of Godhead], the pleasure derived from dharma, artha, kāma and mokṣa appears like a drop in the presence of the sea." (CC ''Adi'' 7.85) As already stated in the previous verse of this chapter, gāyan vilajjo vicared asaṅgaḥ: one exhibits the ecstatic symptoms of love of Godhead when he is asaṅga, free from all attachment to material sense gratification.

The word loka-bāhyaḥ in this verse indicates that a pure devotee on the platform of prema, love of Godhead, is not at all concerned with ridicule, praise, respect or criticism from ordinary people in the bodily concept of life. Kṛṣṇa is the Absolute Truth, the Supreme Personality of Godhead, and when He reveals Himself to a surrendered servant, all doubt and speculation about the nature of the Absolute are vanquished forever.

In this connection Śrīpāda Madhvācārya has quoted a verse from the Varāha Purāṇa:

"Some devotees of the Lord exhibit external symptoms, acting like madmen, others are introspective devotees, and still others partake of both natures. It is by one's steadfastness and by the merciful vibrations emanating from one's mouth that one's devotion can be judged, not otherwise."

Śrīla Viśvanātha Cakravartī Ṭhākura has given a very nice example to illustrate ecstatic laughing and other symptoms of love of Godhead: 'Oh, that thief Kṛṣṇa, the son of Yaśodā, has entered the house to steal the fresh butter. Grab Him! Keep Him away!' Hearing these menacing words spoken by the elderly gopī Jaratī, Kṛṣṇa immediately prepares to leave the house. The devotee to whom this transcendental pastime is revealed laughs in ecstasy. But suddenly he can no longer see Kṛṣṇa. He then cries in great lamentation, 'Oh! I achieved the greatest fortune in the world, and now it has suddenly slipped from my hands!' Thus the devotee cries loudly, 'So my Lord! Where are You? Give me Your answer!' The Lord answers, 'My dear devotee, I heard your loud complaint, and so I have again come before you.' Upon seeing Lord Kṛṣṇa again, the devotee begins to sing, 'Today my life has become perfect.' Thus overwhelmed with transcendental bliss, he begins to dance like a madman."

Śrīla Viśvanātha Cakravartī Ṭhākura also notes that the word druta-cittaḥ or "with a melted heart," indicates that one's heart, melted by the fire of anxiety to see the Lord, becomes like Jambūnadī, a river of roseapple juice. The ācārya further points out, nāma-kīrtanasya sarvotkarṣam: the present and previous verse clearly distinguish the exalted position of śravaṇaṁ kīrtanaṁ viṣṇoḥ (SB 7.5.23), chanting and hearing the name and glories of the Supreme Personality of Godhead. Caitanya Mahāprabhu also emphasized this by quoting:

Śrīla Bhaktisiddhānta Sarasvatī Ṭhākura recommends that we study the following verse in this connection:

"Let the garrulous populace say whatever they like; we shall pay them no regard. Thoroughly maddened by the ecstasy of the intoxicating beverage of love for Kṛṣṇa, we shall enjoy life running about, rolling on the ground and dancing in ecstasy." (Padyāvalī 73)