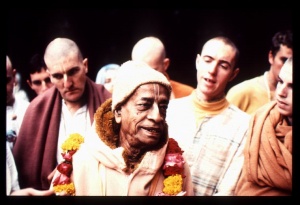 From the four types of evidence—Vedic knowledge, direct experience, traditional wisdom and logical induction—one can understand the temporary, insubstantial situation of the material world, by which one becomes detached from the duality of this world.

In the śruti, or Vedic literature, it is clearly stated that everything emanates from the Absolute Truth, is maintained by the Absolute Truth and at the end is conserved within the Absolute Truth. Similarly, by direct experience we can observe the creation and destruction of great empires, cities, buildings, bodies and so on. Furthermore, we find all around the world traditional wisdom warning people that things in this world cannot last. Finally, by logical induction we can easily conclude that nothing in this world is permanent. Material sense gratification—up to the highest possible living standard found in the heavenly planets or down to the lowest conditions in the most repugnant precincts of hell—is always unsteady and prone to collapse at any moment. One should therefore develop vairāgya, detachment, as stated here.

Another meaning of this verse is that the four types of evidence cited here are often mutually contradictory in their description of the highest truth. One should therefore be detached from the duality of mundane evidence, including the portions of the Vedas that deal with the material world. Instead, one should accept the Supreme Personality of Godhead as the actual authority. Both in Bhagavad-gītā and here in Śrīmad-Bhāgavatam Lord Kṛṣṇa is personally speaking, and thus there is no need to enter into the bewildering network of competing systems of mundane logic. One can directly hear from the Absolute Truth Himself and immediately acquire perfect knowledge. One thereby becomes detached from inferior systems of knowledge, which cause one to hover on the material mental platform.