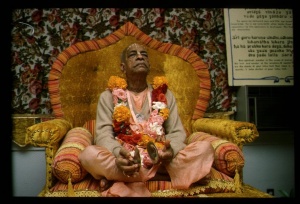 The Supreme Personality of Godhead said: A self-realized person who has cultivated scriptural knowledge up to the point of enlightenment and who is free from impersonal speculation, understanding the material universe to be simply illusion, should surrender unto Me both that knowledge and the means by which he achieved it.

Māyā-mātram idaṁ jñātvā indicates knowledge that the eternal spirit soul and the eternal Personality of Godhead are completely separate from the temporary qualities of the material world. The word vidyā-śruta-sampanna means that one should cultivate Vedic knowledge for the purpose of enlightenment and not to make a show of mysticism, intellectuality or impersonal speculation. Having neutralized the illusory effects of māyā, one should then transfer one's attention to the Supreme Personality of Godhead, surrendering the process of philosophical negation to the Lord Himself. Śrīla Jīva Gosvāmī gives the example that when there is danger the king may issue weapons to private citizens, but after military victory the individual citizens return the weapons to the king.

Śrīla Viśvanātha Cakravartī Ṭhākura explains this point of this verse as follows. Somehow or other the living entity has to free himself from material illusion, which has covered him since time immemorial. Cultivating desirelessness and renunciation by practice of the mystic yoga system, the living entity develops knowledge of illusion and may thus lift himself above the reach of material ignorance. However, once one is situated on the transcendental platform, both knowledge of illusion and the process of acquiring such knowledge have no further practical application. Śrīla Viśvanātha Cakravartī Ṭhākura gives the example that a man may be haunted by the ghost of a snake or a tiger. As long as the man is possessed and thinks, "I am a snake" or "I am a tiger," attempts will be made to counteract the ghostly influence by application of jewels, mantras and herbs. But when the man is freed from possession by ghosts, he again thinks, "I am Mr. So-and-so, the son of Mr. So-and-so," and returns to his original nature. At that time the jewels, mantras and herbs have no further immediate application. The word vidyā in this verse thus indicates knowledge acquired through philosophical analysis, mystic yoga, austerities and renunciation. Such knowledge of the temporary, illusory nature of this world counteracts ignorance, and there are many Vedic scriptures that train the living entity in such knowledge. Gradually one gives up his false identification with the material body and mind and with those material objects that interact with the body and mind. Having realized such counteractive knowledge, one must engage in the loving service of the Personality of Godhead and become a pure devotee. When one is completely perfect in Kṛṣṇa consciousness, there is naturally little interest in the innumerable details of illusion, and gradually one is transferred to the spiritual world.