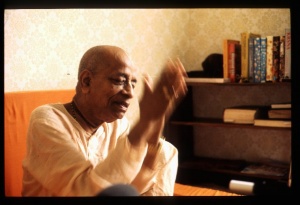 sva-mātuḥ—of His own mother (Kṛṣṇa's mother, Yaśodādevī); svinna-gātrāyāḥ—when Kṛṣṇa saw His mother perspiring all over because of unnecessary labor; visrasta—were falling down; kabara—from her hair; srajaḥ—of whom the flowers; dṛṣṭvā—by seeing the condition of His mother; pariśramam—He could understand that she was now overworked and feeling fatigued; kṛṣṇaḥ—the Supreme Personality of Godhead; kṛpayā—by His causeless mercy upon His devotee and mother; āsīt—agreed; sva-bandhane—in binding Him.

Because of mother Yaśodā's hard labor, her whole body became covered with perspiration, and the flowers and comb were falling from her hair. When child Kṛṣṇa saw His mother thus fatigued, He became merciful to her and agreed to be bound.

When mother Yaśodā and the other ladies finally saw that Kṛṣṇa, although decorated with many bangles and other jeweled ornaments, could not be bound with all the ropes available in the house, they decided that Kṛṣṇa was so fortunate that He could not be bound by any material condition. Thus they gave up the idea of binding Him. But in competition between Kṛṣṇa and His devotee, Kṛṣṇa sometimes agrees to be defeated. Thus Kṛṣṇa's internal energy, yoga-māyā, was brought to work, and Kṛṣṇa agreed to be bound by mother Yaśodā.