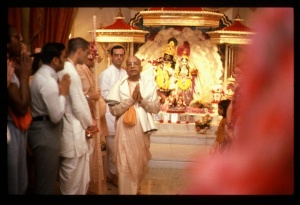 We wish to properly understand this matter, which greatly puzzles us. Indeed, the results attained by the worshipers of these two lords of opposite characters are contrary to what one would expect.

The preceding chapter ended with the recommendation that one should always meditate on Lord Hari, the bestower of liberation. In this regard Mahārāja Parīkṣit here expresses a common fear among ordinary people that by becoming a devotee of Lord Viṣṇu one will lose his wealth and social status. For the benefit of such persons of little faith, King Parīkṣit requests Śrīla Śukadeva Gosvāmī to explain an apparent paradox: Lord Śiva, who lives like a beggar, without even a house to call his own, makes his devotees rich and powerful, while Lord Viṣṇu, the omnipotent possessor of all that exists, often reduces His servants to abject poverty. Śukadeva Gosvāmī will respond with reasoned explanations and an ancient account concerning the demon Vṛka.