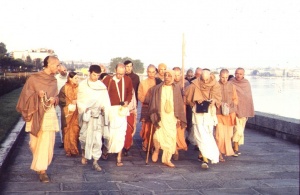 Śrī Satyabhāmā said: My father, his heart tormented by his brothers death, accused Kṛṣṇa of killing him. To remove the stain on His reputation, the Lord defeated the king of the bears and took back the Syamantaka jewel, which He then returned to my father. Fearing the consequences of his offense, my father offered me to the Lord, even though I had already been promised to others.

As described in Chapter 56 of this canto, King Satrājit had already compromised himself by promising his daughter's hand first to Akrūra and then again to a number of other suitors. But after the return of the Syamantaka jewel, he felt impelled by his shame to offer her to Lord Kṛṣṇa instead. According to Śrīla Śrīdhara Svāmī, the word prabhave ("unto the Lord") answers any doubt as to the propriety of offering Kṛṣṇa a bride who had already been promised to others. It is perfectly proper to offer Him everything one owns, and improper to withhold anything from Him.