Srimad-Bhagavatam - Tenth Canto - Chapter 7: The Killing of the Demon Tṛṇāvarta 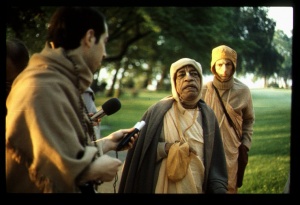 tṛṇāvartaḥ—the demon Tṛṇāvarta; śānta-rayaḥ—the force of the blast reduced; vātyā-rūpa-dharaḥ—who had assumed the form of a forceful whirlwind; haran—and had thus taken away; kṛṣṇam—Kṛṣṇa, the Supreme Personality of Godhead; nabhaḥ-gataḥ—went up to the top of the sky; gantum—to go further; na aśaknot—was not able; bhūri-bhāra-bhṛt—because Kṛṣṇa then became more powerful and heavy than the demon.

Having assumed the form of a forceful whirlwind, the demon Tṛṇāvarta took Kṛṣṇa very high in the sky, but when Kṛṣṇa became heavier than the demon, the demon had to stop his force and could go no further.

Here is a competition in yogic power between Kṛṣṇa and Tṛṇāvartāsura. By practicing mystic yoga, asuras generally attain some perfection in the eight siddhis, or perfections, namely aṇimā, laghimā, mahimā, prāpti, prākāmya, īśitva, vaśitva and kāmāvasāyitā. But although a demon may acquire such powers to a very limited extent, he cannot compete with the mystic power of Kṛṣṇa, for Kṛṣṇa is Yogeśvara, the source of all mystic power (yatra yogeśvaro hariḥ (BG 18.78)). No one can compete with Kṛṣṇa. Sometimes, of course, having acquired a fragmental portion of Kṛṣṇa's mystic power, asuras demonstrate their power to the foolish public and assert themselves to be God, not knowing that God is the supreme Yogeśvara. Here also we see that Tṛṇāvarta assumed the mahimā-siddhi and took Kṛṣṇa away as if Kṛṣṇa were an ordinary child. But Kṛṣṇa also became a mystic mahimā-siddha. When mother Yaśodā was carrying Him, He became so heavy that His mother, who was usually accustomed to carrying Him, could not bear Him and had to place Him down on the ground. Thus Tṛṇāvarta had been able to take Kṛṣṇa away in the presence of mother Yaśodā. But when Kṛṣṇa, high in the sky, assumed the mahimā-siddhi, the demon, unable to go further, was obliged to stop his force and come down according to Kṛṣṇa's desire. One should not, therefore, compete with Kṛṣṇa's mystic power.

Devotees automatically have all mystic power, but they do not like to compete with Kṛṣṇa. Instead, they fully surrender to Kṛṣṇa, and their yogic power is demonstrated by Kṛṣṇa's mercy. Devotees can show mystic yoga so powerful that a demon could not even dream of it, but they never try to demonstrate it for their personal sense gratification. Whatever they do is for the service of the Lord, and therefore they are always in a position superior to that of the demons. There are many karmīs, yogīs and jñānīs who artificially try to compete with Kṛṣṇa, and thus ordinary, foolish people who do not care to hear Śrīmad-Bhāgavatam from authorities consider some rascal yogī to be Bhagavān, the Supreme Personality of Godhead. At the present moment there are many so-called bābās who present themselves as incarnations of God by showing some insignificant mystic wonder, and foolish people regard them as God because of lacking knowledge of Kṛṣṇa.