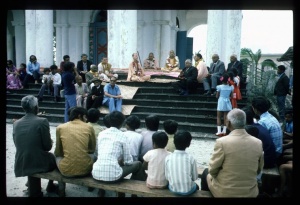 [The Kuru nobles said:] Oh, how amazing this is! The force of time is indeed insurmountable: a lowly shoe now wants to climb on the head that bears the royal crown.

By the words kāla-gatyā duratyayā, "the insurmountable movement of time," the intolerant Kurus allude to the degraded age of Kali, which was about to begin. Here the Kurus indicate that the fallen age of Kali had indeed already begun, since they claim that now "the shoe wants to climb on the head that bears the royal crown." In other words, they thought that the lowly Yadus now wanted to rise above the royal Kurus.