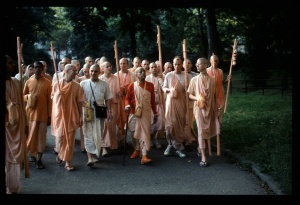 Lord Śiva told him, "Accompanied by brāhmaṇas, serve the Dakṣiṇāgni fire—the original priest—following the injunctions of the abhicāra ritual. Then the Dakṣiṇāgni fire, together with many Pramathas, will fulfill your desire if you direct it against someone inimical to the brāhmaṇas." So instructed, Sudakṣiṇa strictly observed the ritualistic vows and invoked the abhicāra against Lord Kṛṣṇa.

It is clearly stated here that the powerful Dakṣiṇāgni fire could be directed only against someone unfavorable to brahminical culture. Lord Kṛṣṇa, however, is most favorable to the brāhmaṇas and in fact maintains the brahminical culture. Lord Śiva thus knew that if Sudakṣiṇa attempted to direct the power of this ritual against Lord Kṛṣṇa, Sudakṣiṇa himself would perish.