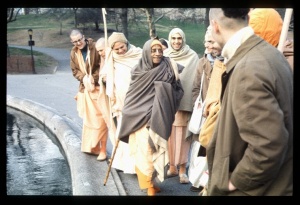 [Again Balarāma addressed Kṛṣṇa:] Blinded by conceit with their personal opulences, proud men offend others for the sake of such things as kingdom, land, wealth, women, honor and power.

Lord Kṛṣṇa was originally meant to marry Rukmiṇī. All along this was the best arrangement for all concerned, and yet from the beginning Rukmī had maliciously opposed this beautiful arrangement. When his sister's desire was finally fulfilled and she was taken by Kṛṣṇa, he viciously attacked the Lord with vulgar insults and mortal weapons. In return Lord Kṛṣṇa tied him up and partially clipped his hair and mustache. While certainly humiliating for a puffed-up prince like Rukmī, his punishment was a mere slap on the wrist, considering what he had done.