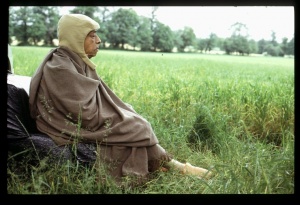 The various groups of people in the arena regarded Kṛṣṇa in different ways when He entered it with His elder brother. The wrestlers saw Kṛṣṇa as a lightning bolt, the men of Mathurā as the best of males, the women as Cupid in person, the cowherd men as their relative, the impious rulers as a chastiser, His parents as their child, the King of the Bhojas as death, the unintelligent as the Supreme Lord's universal form, the yogīs as the Absolute Truth and the Vṛṣṇis as their supreme worshipable Deity.

"[There are ten different moods:] fury [perceived by the wrestlers], wonder [by the men], conjugal attraction [the women], laughter [the cowherds], chivalry [the kings], mercy [His parents], terror [Kaṁsa], ghastliness [the unintelligent], peaceful neutrality [the yogīs] and loving devotion [the Vṛṣṇis]."

Śrīla Viśvanātha Cakravartī points out that people like the wrestlers, Kaṁsa and the impious rulers perceive Kṛṣṇa as dangerous, angry or threatening because they fail to understand the actual position of the Personality of Godhead. Actually, Lord Kṛṣṇa is everyone's friend and well-wisher, but because we rebel against Him, He chastises us, and thus we may perceive Him as threatening. Kṛṣṇa, or God, is actually merciful, and when He punishes us, that is also His mercy.

Śrīla Bhaktisiddhānta Sarasvatī Ṭhākura quotes the following Vedic statement: raso vai saḥ rasaṁ hy evāyaṁ labdhvānandī bhavati. "He Himself is rasa, the taste or mellow of a particular relationship. And certainly one who achieves this rasa becomes ānandī, filled with bliss." (Taittirīya Upaniṣad 2.7.1)

"That which is beyond imagination, heavy with wonder and relished in the heart shining with goodness—such is known as rasa."

As Śrīla Rūpa Gosvāmī elaborately explains in his Bhakti-rasāmṛta-sindhu, there are five main rasas —neutrality, servitude, friendship, parental love and conjugal love—and seven secondary rasas —amazement, humor, chivalry, compassion, fury, fear and dread. Thus altogether there are twelve rasas, and the supreme object of them all is Śrī Kṛṣṇa Himself. In other words, our love and affection are actually meant for Śrī Kṛṣṇa. Unfortunately, out of ignorance we stubbornly try to squeeze happiness and love out of material relationships, which are not directly connected to Kṛṣṇa, and thus life becomes a constant frustration. The solution is simple: surrender to Kṛṣṇa, love Kṛṣṇa, love Kṛṣṇa's devotees and be happy forever.