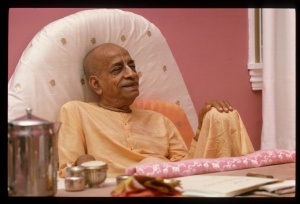 As the gopīs wandered about, their minds completely bewildered, they pointed out various signs of Kṛṣṇa's pastimes. The particular gopī whom Kṛṣṇa had led into a secluded forest when He had abandoned all the other young girls began to think Herself the best of women. "My beloved has rejected all the other gopīs," She thought, "even though they are driven by Cupid himself. He has chosen to reciprocate with Me alone."