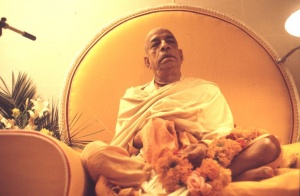 My dear Lord, neither I nor anyone else can estimate the potency of this transcendental body of Yours, which has shown such mercy to me and which appears just to fulfill the desires of Your pure devotees. Although my mind is completely withdrawn from material affairs, I cannot understand Your personal form. How, then, could I possibly understand the happiness You experience within Yourself?

In Kṛṣṇa, the Supreme Personality of Godhead, Chapter Fourteen, Śrīla Prabhupāda explains that in the present verse Lord Brahmā expressed the following prayerful sentiment: "Your appearance as a cowherd child is for the benefit of the devotees, and although I have committed an offense at Your lotus feet by stealing away Your boys and calves, I can understand that You have bestowed Your mercy upon me. That is Your transcendental quality: You are very affectionate toward Your devotees. But in spite of Your great affection for me, I cannot estimate the potency of Your bodily activities. It is to be understood that when I, Lord Brahmā, the supreme personality of this universe, cannot estimate the childlike body of the Supreme Personality of Godhead, then what to speak of others? And if I cannot estimate the spiritual potency of Your childlike body, then what can I understand about Your transcendental pastimes? Therefore, as it is said in the Bhagavad-gītā, anyone who can understand a little of the transcendental pastimes, appearance and disappearance of the Lord immediately becomes eligible to enter the kingdom of God after quitting the material body. This statement is confirmed in the Vedas, where it is stated. Simply by understanding the Supreme Personality of Godhead, one can overcome the chain of repeated birth and death. I therefore recommend that people should not try to understand You by their speculative knowledge."

When Brahmā disrespected the supreme status of the Personality of Godhead, Lord Kṛṣṇa first bewildered him by exhibiting the Lord's own transcendental power. Then, having humbled His devotee Brahmā, Kṛṣṇa gave him His personal audience.

According to Śrīla Viśvanātha Cakravartī Ṭhākura, Lord Kṛṣṇa's transcendental body can also function through the agency of His plenary expansions, called viṣṇu-tattva. As stated by Brahmā himself in the Brahma-saṁhitā (BS 5.38): aṅgāni yasya sakalendriya-vṛttimanti. This verse indicates not only that the Lord can perform any bodily function with any of His limbs but also that He can see through the eyes of His Viṣṇu expansions or, indeed, through the eyes of any living entity, and similarly that He can hear through the ears of any Viṣṇu or jīva expansion. Śrīla Viśvanātha Cakravartī Ṭhākura points out that although the Lord can perform any function with any one of His senses, in His transcendental pastimes as Śrī Kṛṣṇa He generally sees with His eyes, touches with His hands, hears with His ears and so on. Thus He behaves like the most beautiful and charming young cowherd boy.

The Vedic knowledge expands from Lord Brahmā, who is described in the first verse of Śrīmad-Bhāgavatam as ādi-kavi, the primeval Vedic scholar. Yet Brahmā could not understand the transcendental body of Lord Kṛṣṇa, because it is beyond the reach of ordinary Vedic knowledge. Among all the transcendental forms of the Lord, the two-armed form of Govinda-Kṛṣṇa—is original and supreme. Thus Lord Govinda's pastimes of stealing butter, drinking the gopīs' breast-milk, tending the calves, playing His flute and playing childhood sports are extraordinary even in comparison with the activities of the Lord's Viṣṇu expansions.