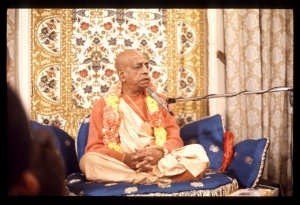 Having experienced a situation by seeing or hearing about it, one contemplates and speculates about that situation, and thus one surrenders to it, not considering his present body. Similarly, by mental adjustments one dreams at night of living under different circumstances, in different bodies, and forgets his actual position. Under this same process, one gives up his present body and accepts another [tathā dehāntara-prāptiḥ (BG 2.13)].

Transmigration of the soul is very clearly explained in this verse. One sometimes forgets his present body and thinks of his childhood body, a body of the past, and of how one was playing, jumping, talking and so on. When the material body is no long workable, it becomes dust: "For dust thou art, and unto dust shalt thou return." But when the body again mixes with the five material elements—earth, water, fire, air and ether—the mind continues to work. The mind is the subtle substance in which the body is created, as we actually experience in our dreams and also when we are awake in contemplation. One must understand that the process of mental speculation develops a new type of body that does not actually exist. If one can understand the nature of the mind (manorathena) and its thinking, feeling and willing, one can very easily understand how from the mind different types of bodies develop.

The Kṛṣṇa consciousness movement, therefore, offers a process of transcendental activities wherein the mind is fully absorbed in affairs pertaining to Kṛṣṇa. The presence of the soul is perceived by consciousness, and one must purify his consciousness from material to spiritual, or, in other words, to Kṛṣṇa consciousness. That which is spiritual is eternal, and that which is material is temporary. Without Kṛṣṇa consciousness, one's consciousness is always absorbed in temporary things. For everyone, therefore, Kṛṣṇa recommends in Bhagavad-gītā (BG 9.34), man-manā bhava mad-bhakto mad-yājī māṁ namaskuru (BG 18.65). One should always be absorbed in thought of Kṛṣṇa, one should become His devotee, one should always engage in His service and worship Him as the supreme great, and one should always offer Him obeisances. In the material world one is always a servant of a greater person, and in the spiritual world our constitutional position is to serve the Supreme, the greatest, paraṁ brahma. This is the instruction of Śrī Caitanya Mahāprabhu. Jīvera 'svarūpa' haya-kṛṣṇera 'nitya-dāsa' (CC Madhya 20.108).

To act in Kṛṣṇa consciousness is the perfection of life and the highest perfection of yoga. As Lord Kṛṣṇa says in Bhagavad-gītā (BG 6.47):

"Of all yogīs, he who always abides in Me with great faith, worshiping Me in transcendental loving service, is most intimately united with Me in yoga and is the highest of all."

The condition of the mind, which flickers between saṅkalpa and vikalpa, accepting something and rejecting it, is very important in transferring the soul to another material body at the time of death.

"Whatever state of being one remembers when he quits his body, that state he will attain without fail." (BG 8.6) Therefore one must train the mind in the system of bhakti-yoga, as did Mahārāja Ambarīṣa, who kept himself always in Kṛṣṇa consciousness. Sa vai manaḥ kṛṣṇa-padāravindayoḥ (SB 9.4.18). One must fix the mind at the lotus feet of Kṛṣṇa twenty-four hours a day. If the mind is fixed upon Kṛṣṇa's lotus feet, the activities of the other senses will be engaged in Kṛṣṇa's service. Hṛṣīkeṇa hṛṣīkeśa-sevanaṁ bhaktir ucyate: (CC Madhya 19.170) to serve Hṛṣīkeśa, the master of the senses, with purified senses is called bhakti. Those who constantly engage in devotional service are situated in a transcendental state, above the material modes of nature. As Kṛṣṇa says in Bhagavad-gītā (BG 14.26):

"One who engages in full devotional service, who does not fall down in any circumstance, at once transcends the modes of material nature and thus comes to the level of Brahman." One must learn the secret of success from the Vedic literatures, especially when the cream of Vedic knowledge is presented by Bhagavad-gītā as it is.

Because the mind is ultimately controlled by the Supreme Personality of Godhead, Kṛṣṇa, the word apasmṛtiḥ is significant. Forgetfulness of one's own identity is called apasmṛtiḥ. This apasmṛtiḥ can be controlled by the Supreme Lord, for the Lord says, mattaḥ smṛtir jñānam apohanaṁ ca: (BG 15.15) "From Me come remembrance, knowledge and forgetfulness." Instead of allowing one to forget one's real position, Kṛṣṇa can revive one's original identity at the time of one's death, even though the mind may be flickering. Although the mind may work imperfectly at the time of death, Kṛṣṇa gives a devotee shelter at His lotus feet. Therefore when a devotee gives up his body, the mind does not take him to another material body (tyaktvā dehaṁ punar janma naiti mām eti (BG 4.9)); rather, Kṛṣṇa takes the devotee to that place where He is engaged in His pastimes (mām eti), as we have already discussed in previous verses. One's consciousness, therefore, must always be absorbed in Kṛṣṇa, and then one's life will be successful. Otherwise the mind will carry the soul to another material body. The soul will be placed in the semen of a father and discharged into the womb of a mother. The semen and ovum create a particular type of body according to the form of the father and mother, and when the body is mature, the soul emerges in that body and begins a new life. This is the process of transmigration of the soul from one body to another (tathā dehāntara-prāptiḥ (BG 2.13)). Unfortunately, those who are less intelligent think that when the body disappears, everything is finished. The entire world is being misled by such fools and rascals. But as stated in Bhagavad-gītā (BG 2.20), na hanyate hanyamāne śarīre. The soul does not die when the body is destroyed. Rather, the soul takes on another body.